The Juno mission launched on August 5, 2011 and arrived in the Jupiter system July 5, 2016 after travelling approximately 2.8 billion kilometres.

The scientific objectives of the mission are to: 1

Citizen scientist Kevin M. Gill created this image using data from the spacecraft’s JunoCam imager. The image has been rotated approximately 100 degrees to the right.

This image of Jupiter’s turbulent southern hemisphere was captured by NASA’s Juno spacecraft as it performed its most recent close flyby of the gas giant planet on Dec. 21, 2018.

This new perspective captures the notable Great Red Spot, as well as a massive storm called Oval BA. The storm reached its current size when three smaller spots collided and merged in the year 2000. The Great Red Spot, which is about twice as wide as Oval BA, may have formed from the same process centuries ago.

Juno captured Oval BA in another image earlier on in the mission on Feb. 7, 2018. The turbulent regions around, and even the shape of, the storm have significantly changed since then. Oval BA further transformed in recent months, changing colour from reddish to a more uniform white. 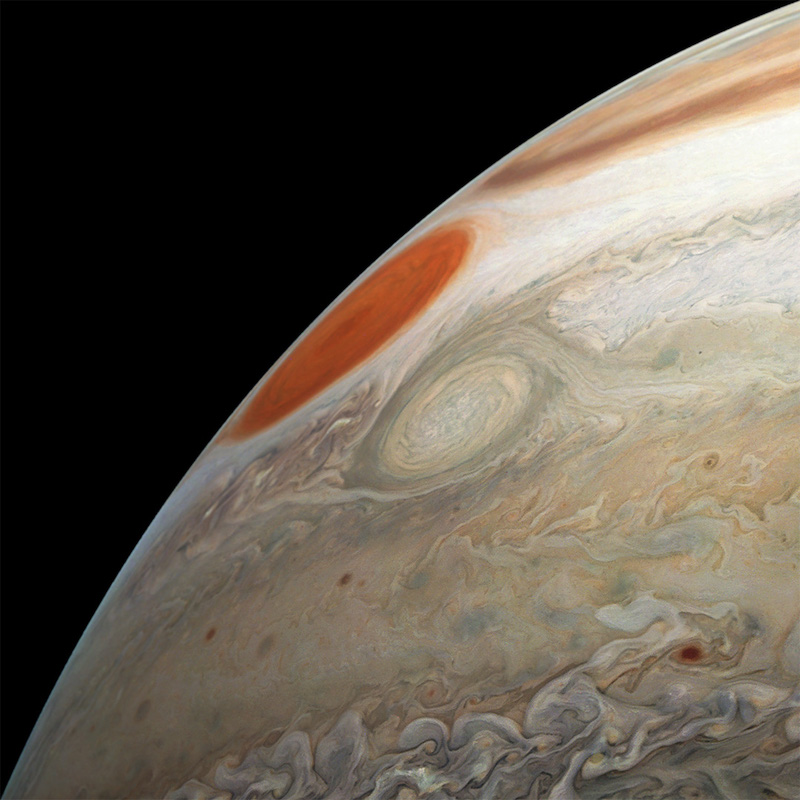 Clouds in a Jovian jet stream, called Jet N5, swirl in the center of this color-enhanced image from NASA’s Juno spacecraft. A brown oval known as a “brown barge” can be seen in the North North Temperate Belt region in the top-left portion of the image.

Citizen scientists Brian Swift and Seán Doran created this image using data from the spacecraft’s JunoCam imager. The view has been rotated 90 degrees to the right from the original image.

Jupiter appears in this colour-enhanced image as a tapestry of vibrant cloud bands and storms. The dark region in the far left is called the South Temperate Belt. Intersecting the belt is a ghost-like feature of slithering white clouds. This is the largest feature in Jupiter’s low latitudes that’s a cyclone (rotating with clockwise motion).

See Jupiter’s southern hemisphere in beautiful detail in this new image taken by NASA’s Juno spacecraft. The colour-enhanced view captures one of the white ovals in the “String of Pearls,” one of eight massive rotating storms at 40 degrees south latitude on the gas giant planet. 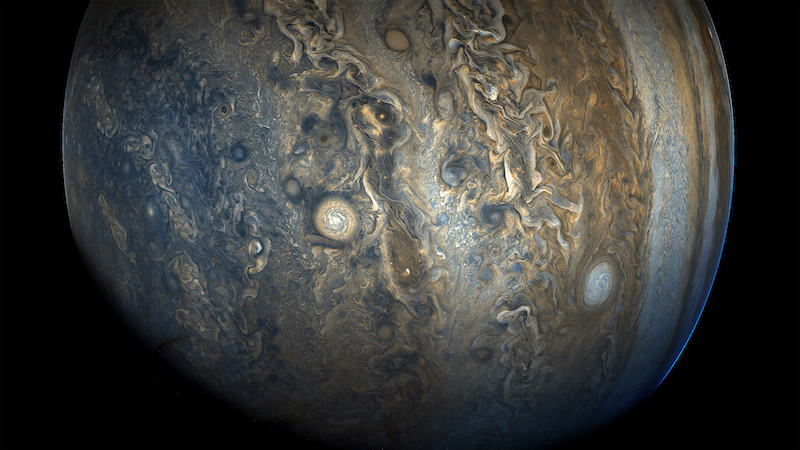 More information about the Juno mission can be found at NASA and SWRI.